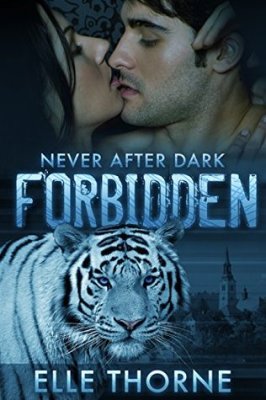 A SPIN OFF SERIES OF SHIFTERS FOREVER!

This one takes place in Europe, the original home of the Tiero shifters. Rafael “Rafe” Tiero has it bad for Callie, his half-brother’s woman. He thinks that’s the kind of woman he needs, sweet and mild-tempered. How did that potty-mouthed barista called Jax, with her funky ways, nails, and attitude get under his skin?

Jaclyn “Jax” Vasquez has a problem. Her parents are in town for a surprise visit. If they see her boyfriend, Scotty, the proverbial $h1t will hit the fan! She needs help and chooses the first–and only–option, the indigo-eyed stranger in the corner.
What could possibly make this worse? He’s a white tiger shifter, and she’s got a secret.
Sparks and fur fly!

If hot sex skeeves you out, you may want to pass on this book.
If freaky, downright dirty sexy talk bothers you, yeah, for sure you gotta pass on this one.
We believe in sex–hot, dirty, delicious sex.
Yup, make it sweaty, too. It’s not just sex, it’s about the romance.
But good romance has sex, and we keep the doors open! Oh, and the lights on! 😉

Different as night and day. That would describe the main characters of this romance. Jax is kind of a free spirit, works in a coffee shop, is tattoo’ed a few times, and lives with her no good, cheating, out of work, gamer boyfriend. Rafe is mega rich, runs the family company and lives on an estate outside of Rome. He is grieving the loss of the woman he loves to his brother, and has left his home for the night. He’s in a small coffee shop when he notices Jax behind the counter-and Jax’s boyfriend. Jax’s boyfriend is on her last nerve, taking all her money for whiskey, and she is supporting him. When Jax’s parents show up unexpectedly in town, Jax needs a pretend boyfriend and fast since they can’t stand her boyfriend. Guess who steps up?

This was an extremely short read. It’s billed at 105 pages, but it finished at 85% so it only took me less than two hours to read. Could there have been more story development, more character complexity? Of course, but since this is a novella, that pretty much goes with the territory.The story takes place over a two day period and since it does involve a white tiger shifter, the inst-love thing is more acceptable to me. The mating thing and all that goes with it.There’s a little bit of world building as well, and more of that would have been welcome to the reader like me that hasn’t read the first series. This might be a spin off, but most of the peripheral characters seem like they are from the other series-with the exception of Jax’s parents.

I did like the characters and also the extra bit of magic involved in one of Jax’s tattoos. The story was fun and I did enjoy the read. I just wish it had been a tad longer and more developed but again that goes with the novella territory.

Elle bends the rules, creates havoc, and raises cain every chance she gets. When she’s not involved in these pursuits, she’s writing stories about hot men, sexy women, and the stuff that happens between them. On occasion, those men and women are aliens, shifters, demons. This makes them so much hotter!

“For the most part, I’m an ordinary girl, who lives an ordinary life and has been lucky enough to be exposed (no pun, seriously) to many different walks of life. Some of the opportunities I passed up on quite unwisely, but if I’d taken them, then I wouldn’t be here, now.

So, no regrets, right? Or so I’d like to think, because regretting what you can’t change may be pointless.”

REVIEW by Trish: I Am by Michael Drakich