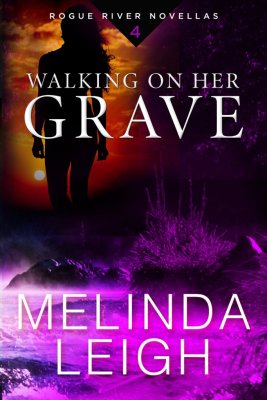 The electrifying conclusion of the romantic suspense novella series from Melinda Leigh and Kendra Elliot.
The sleepy town of Solitude, Oregon, has turned into ground zero for a turf war between the manufacturers and distributors of a lethal new drug. When a teenage witness disappears, social worker Carly Taylor must find him before he’s silenced permanently.
Rogue County investigator Seth Harding wants to keep Carly, his estranged wife, out of harm’s way, but she refuses to let his concern keep her from doing her job. When one of her young charges vanishes, Carly gets pulled even deeper into the deadly case, and Seth knows he must help her…even if it leads them right into the criminals’ crosshairs.
Explosive and exciting to the last page, Walking on Her Grave is the fourth and final thrilling addition to the new romantic suspense series from Melinda Leigh and Kendra Elliot.

This is the fourth, and final installment of this series of four novellas written alternatively by Melinda Leigh, and Kendra Elliott. Each of them was a good mystery with an equally good romance.
The main characters of this book are Carly, a children’s services social worker, and her estranged husband Seth, a detective on a drug task force. Carly is very caring towards not only her own daughter, but also each and every child she comes in contact with. She wants to be there to stand for them, when no one else does. She is separated from Seth, due to his hardheaded stance on her visiting homes during volatile situations. He just doesn’t feel her job is as important as his job. The new drug that has insinuated itself into this small town, and caused so many deaths, is still around, and the police are still investigating.
As I mentioned before in the second review on these stories I wrote, Seth was not my favorite character in these novellas. His treatment, and thoughts towards Carly, was nothing short of sexism, and it wasn’t much better this time around, although he does try. However, to me, forcing himself to try isn’t the same as actually believing his wife’s job is as important as his. So yes, not really my favorite character. I have really liked Carly in all of these stories. She’s just such a caring person, a good mom, and a good social worker. She loves her husband, and he loves her, but they just can’t seem to see eye to eye. Other characters include, Carly’s sister, Stevie, a cop, and her boyfriend Zane, the town’s police chief. I really like the characters of Stevie and Zane in these books.
The mystery of who the kingpin of the drug trade is, in this small town,continues. There’s more action and some harrowing situations. Because it’s only a novella, I don’t want to say any more about the actual story. One thing I will say, I had figured out the main culprit as far back as the first book, and really never suspected anyone else. But then I do read a lot of mysteries, so it’s not unusual for me to figure out the who done it part well before the end.
I enjoyed these novellas, and would be more then happy to read anything else these two good writers decide to collaborate on. These stories are all highly readable, well written, and the romances are good, especially Stevie and Zane’s.
I recommend it to all romantic mystery readers.

The review copy of Walking On Her Grave was supplied by the publisher, Montlake Romance, via NetGalley in exchange for a fair and honest review.

New Release! Check out this excerpt & giveaway from MONGRELS UNITED by Tracy Cooper-Posey!