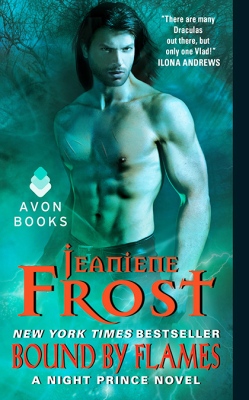 Play with fire, pay the price

Leila’s years on the carnie circuit were certainly an education. What she didn’t learn: how to be a vampire, or how to be married to the most famous vampire of them all. Adjusting to both has Leila teetering on a knife edge between passion and peril, and now the real danger is about to begin . . .

Vlad must battle with a centuries-old enemy whose reach stretches across continents and whose strength equals his own. It isn’t like Vlad to feel fear, but he does . . . for Leila, because his enemy knows she is Vlad’s greatest weakness. As friend and foe alike align against him—and his overprotectiveness drives Leila away—Vlad’s love for his new bride could be the very thing that dooms them both . . .

Bound By Flames
by Jeaniene Frost

I was under the impression that Vlad and Leila’s story actually ends here with Bound By Flames per a blog post from JF herself.  The book wraps up in such a way that would lead one to believe that this is the end of their story.  However, when I went out to read reviews this morning, one of the first ones I saw said a 4th book was coming, possibly being followed up by a 5th.  If it is the end, I’m not going to lie, the pouting has already started.  This is the second couple in a calendar year I have had to say good bye to in the Night Huntress/Night Huntress World/Night Prince books.  I will say that Jeaniene Frost did, as she has done with Cat and Bones, leave it open so Vlad and Leila could potentially come back.  So, that made me feel a little bit better.  A little.  I’m still not over here jumping for joy.  All that being said, if this is not the end….YAY!!!!!!!!!!!  Further research will have to be done because now I cant find JF’s blog post where she talks about the structure of the Night Prince novels changing.

UPDATE:  I heard from Jeaniene Frost and she assures me there will be a fourth Vlad and Leila book.  She stated that it was originally supposed to be a trilogy, but she just couldn’t wrap up Vlad and Leila’s story in three books.  So, YAY!!!!  We get at least one more Night Prince book!

The Big Bad in Bound By Flames is a foe we have met and dealt with in the past.  I am not going to say who it is because the name isn’t in the blurb and I cant for the life of me remember if it was revealed at the end of Twice Tempted.  In the spirit of being spoiler-free, I will keep it to myself.  I will tell you it’s a big one and it could spell serious problems for our hot couple.  *grinning like an idiot* See what I did there?  Hot couple.  Hot.  Because of the flames and such.   *crickets* Never mind.  Back to the book!

I think Jeaniene Frost set a record with this book for most horrific torture scene and she did it without going into graphic detail.  Regardless of the fact that the book didn’t call a play-by-play of what was happening, just the thought of what was happening combined with the descriptive nature of her writing was enough to turn my stomach.  It was a little insane and a whole lot heart-breaking.

Bound By Flames has a little parade of characters from JF’s world and a few of them had me smiling ear to ear.  I love it when a series has character call back.  You fell in love with them long ago, and when they stop by to make a guest appearance, it’s big with the happy making.  I was ecstatic to see some of the guest stars in BBF.  It certainly made me miss the characters more than I already did.

The action in Bound By Flames is almost non-stop.  For an action junkie like me, it was perfect.  It kept the pace of the story moving briskly and holds the reader’s attention.  Of course, there are a handful of mushy gushy moments in the book which break up the sky falling around Vlad and Leila, but aside from that, I felt the action was much more prominent in this series installment than it had been in the past.  It seems like every time these two take a step forward, some great, big, a-hole tries to push them back three.  They spend a good portion of this story on the defensive, which makes for some very intense moments.

As a side note, I read this title via audio book.  Once again, the uber-talented Tavia Gilbert has lent her voice to bring Vlad and Leila to life.  I absolutely adore her as a narrator and as far as I am concerned, Bound By Flames is another tick in her win column.

Leila has a little self-discovery in Bound By Flames and I found I really admired her at the end.  At times, I have been a little on-the-fence about her, but Bound By Flames sealed it for me.  I cant say I love her as much as I love Cat.  I mean, no one is as good of a character as Cat.  But, Leila is definitely a close second in the Night Huntress world for me.  She’s strong-willed, a little mischievous, and she keeps Vlad on his toes.  She’s willing to go all the way to fight for what is hers.  There’s even a moment in Bound By Flames where VLAD gives her a tip of the hat, acknowledging the fierce creature she’s grown to be.  It was very sweet.

Overall, I loved Bound By Flames.  I am holding out hope that it really isn’t the end, but I swear I remember JF saying something along the lines of it was originally supposed to be X books and I was able to wrap it up in 3.  Maybe I have it backwards.  The fangirl in me has her crossables crossed that I am so very wrong.  This is a fantastic series and I would love to see it continue on.   If it is the end, JF did a wonderful job wrapping up the Vlad/Leila story line in a way which felt organic.  Not forced at all.

Oh!!!!!!!!!!!!  There’s a moment at the very end of Bound By Flames which will have you fall over laughing.  It’s something that has been a background factoid throughout all of Vlad’s appearances in the Night Huntress/Night Huntress World/Night Prince books.  There’s a teeny tiny little reveal regarding said nugget of info and the reveal is positively hilarious. 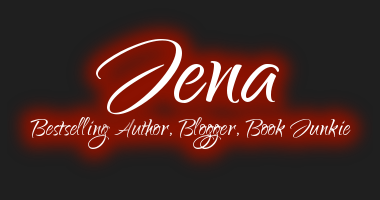 PREVIOUS BOOKS IN THE SERIES
The Night Prince novels are a spin off series from the Night Huntress  series, as are the Night Huntress World novels.  The books shown below are all three intertwined series in the author’s recommended reading order.  Click on the cover image to be taken to the book’s Goodreads page.

Jeaniene Frost is the New York Times, USA Today, and international bestselling author of the Night Huntress series, the Night Prince series and the new Broken Destiny series. To date, foreign rights for her novels have sold to twenty different countries. Jeaniene lives in North Carolina with her husband Matthew, who long ago accepted that she rarely cooks and always sleeps in on the weekends. Aside from writing, Jeaniene enjoys reading, poetry, watching movies with her husband, exploring old cemeteries, spelunking and traveling – by car. Airplanes, children, and cook books frighten her.

REVIEW by @_Shoe_Girl_ : Baby It's Cold Outside by Addison Fox (@AddisonFox)

REVIEW by Beth: Under the Banana Moon by Kimberly Gerry-Tucker