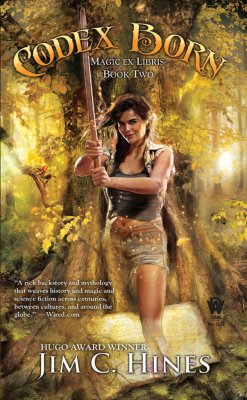 Five hundred years ago, Johannes Gutenberg discovered the art of libriomancy, allowing him to reach into books to create things from their pages. Gutenberg’s power brought him many enemies, and some of those enemies have waited centuries for revenge. Revenge which begins with the brutal slaughter of a wendigo in the northern Michigan town of Tamarack, a long-established werewolf territory.

Libriomancer Isaac Vainio is part of Die Zwelf Portenære, better known as the Porters, the organization founded by Gutenberg to protect the world from magical threats. Isaac is called in to investigate the killing, along with Porter psychiatrist Nidhi Shah and their dryad bodyguard and lover, Lena Greenwood. Born decades ago from the pages of a pulp fantasy novel, Lena was created to be the ultimate fantasy woman, strong and deadly, but shaped by the needs and desires of her companions. Her powers are unique, and Gutenberg’s enemies hope to use those powers for themselves. But their plan could unleash a far darker evil…

Codex Born is book two in the Magic ex Libris series. It picks up a while after the first leaves off, but with a new mystery to solve and a whole new level of danger to face. A vengeful enemy joins forces with a dangerous group of magic wielders, who are not only able to counteract libriomancy, but also to drain away its power.

First off, I like how the seemingly endless possibilities of libriomancy are quite solidly foiled by the new players in this book. It makes for quite an interesting read, not just showing off Isaac’s uber powers, but forcing him to apply thought and creativity. I also like how a greater plot begins to take shape around the main one. It ties this book to the last and, I assume, the next, without leaving off on a true cliffhanger. I like that. Some closure to tide me over until I pick up book three. I also like the geekiness factor of the main character and that his superpower is actually make stronger because of it. It makes for a fun read.

On the other hand, I didn’t quite enjoy this book as much as I did the first. I guess that’s because the powers and such weren’t all that new and shiny, basically building on what was introduced in the previous book. It’s still a good story, and fun, but I didn’t feel as driven to finish it as I did with the first one.

Overall, this is a pretty fun read, well-written and at times exciting. I’d recommend this series to avid readers of fantasy and sci-fi, not necessarily because of this book’s genre, but because they might find some of their favorite tomes fueling the magic.

I bought this book, an actual, physical book, at a local bookstore at the recommendation of a fellow who worked there and said it was a lot of fun.

Jim C. Hines’ latest book is UNBOUND, the third in his modern-day fantasy series about a magic-wielding librarian, a dryad, a secret society founded by Johannes Gutenberg, a flaming spider, and an enchanted convertible. He’s also the author of the PRINCESS series of fairy tale retellings, the humorous GOBLIN QUEST trilogy, and the Fable Legends tie-in BLOOD OF HEROES. His short fiction has appeared in more than 50 magazines and anthologies. Jim lives in Michigan with his wife and two children. He’s currently hard at work on REVISIONARY, the fourth (and final?) book in the MAGIC EX LIBRIS series. Online, he can be found at http://www.jimchines.com.