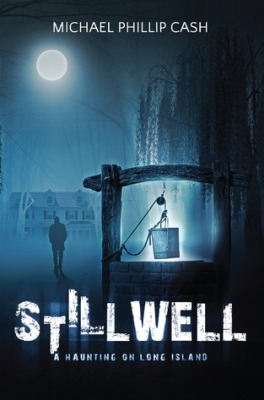 Paul Russo’s wife just died. While trying to get his family’s life back in order, Paul is being tormented by a demon who is holding his wife’s spirit hostage on the other side. His fate is intertwined with an old haunted mansion on the north shore of Long Island called Stillwell Manor. Paul must find clues dating back hundreds of years to set his wife’s soul free.

Stillwell: A Haunting on Long Island
by Michael Phillip Cash

Stillwell is the name of a newly on the market mansion that a grieving widower, Paul, needs to sell. The problem is that it’s hella-haunted and is the site of a recent murder-suicide. Yeah, and it seems something’s following Paul around, too. Could be related to Stillwell; could be related to his recently departed wife.

I liked how this story kept me guessing as to the nature of the haunting from the beginning. There were plenty of moments, like in a horror movie, where I wanted to shout out, “Don’t go in there!” Good for a nice thrill. And Paul’s struggle to get back to living and engaging for the sake of his kids made a nice counterpoint, though sad. There are some tough themes in this story.

In the essence of balance, the story seemed a bit heavy on the background information (for Paul and his wife’s battle with her cancer), especially at first. Though nothing that made me want to skim, I just wanted to get to the promised haunting, and it happened to take a few chapters for stuff to really start happening.

As for that cover art, I love it. Such a haunting image: the well, the ghostly vapors. And it matches spot on with the descriptions of the place from the book. Very nice.
Overall, this is a good ghost story, touching on themes of love, loss, and letting go. It’s not so much of a horror as a paranormal suspense, though there are a couple of pretty scary scenes, one of which came across very vivid and graphic (a crime scene). Let’s just say I wouldn’t want to live any of what Paul was experiencing. No way.

I recommend this book to folks who like a short, but not too short, horror story with a bit of meat to it. It took me a couple of days to read it.

Michael resides on the North Shore of Long Island. He writes full-time with his screaming kids in the background.

Promotional Spotlight! Check out STRAIGHT TO HELL by Jane Hinchey! Includes an Excerpt!