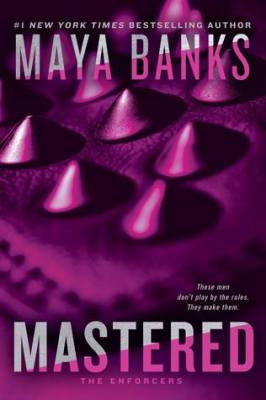 The #1 New York Times bestselling author of the Surrender Trilogy and the Breathless Trilogy knows what makes readers hot. Now she turns it up inMastered, the explosive first book in a new series of a desire too dangerous to resist.

What he wants, he takes with no remorse or guilt.

She stood out in his club like a gem, unspoiled and untouched. A lamb among wolves, she clearly didn’t belong. Drawn to her innocence he watched as she was surrounded by men who saw what he did—but no one but him could touch her. He summoned her to his private quarters. He sensed her fear. He also recognized the desire in her eyes. And he knew she wouldn’t leave before he possessed her. She had no need to know his secrets. Not until he had her under his complete and utter control.

What he wants, she isn’t sure she can give him.

The moment he told her want he wanted, she couldn’t resist. Instinct told her to run, but her heart said stay and walk the fine line between pleasure and pain. Though she wasn’t sure she could ever completely surrender, the primal part of her wanted to try, even knowing this man could break her in ways she never imagined. Because once he possessed her, he owned her and it would be too late to turn back. She can only pray that he doesn’t destroy her in the end.

KEEP READING TO LEARN MORE ABOUT THE BOOK
AND READ BRANDY’S REVIEW!

Let me start out by saying that I love Maya Banks.  I really enjoyed the Slow Burn Novels and I love getting to read her new works.  That being said I was kind of disappointed in this story.  Evangeline was a hard character for me to connect with.  She was a bit to insecure and critical of herself.  I understand body issues or not liking yourself but she was a little more than that.
Drake.  I love stories with dominating men and submissive women.  The D/s lifestyle is one that I think gets twisted and abused in stories at times.  So, hear are a couple of my issues with the book.  Keep in mind, opinions are like assholes and everyone has them.  What doesn’t work for me might be the book that rocks your world.  To each his own.
First, no innocent is going to allow a stranger to call her into his office and go to work on her like Drake did.  Nope.  Not happening, especially one like Evangeline.  Second, hello secrets.  Drake just demands that she moves in and submits to him and she literally asks no questions?  Me on the other hand?  I need a background check, credit check, three personal references, DNA sample, lie detector test and a certified affidavit from his parents. Third, the way she allows him to treat her is just sad.  She was too innocent to allow Drake to have a stranger come in and have sex with her.  That is the type of thing that is discussed between two consenting adults beforehand not during.
Yes, I KNOW that it is all fiction but I was just disappointed in Evangeline’s character.  I don’t mind a submissive MC but I want a submissive who realizes that she has the power in the relationship.  I also know that a true D/s relationship is based on trust and that takes time to build.  These two never got to that point.
As this is a CLIFFHANGER, I will be anxiously awaiting Dominated to see if Drake has become more than the thug he seems and Evangeline can become more powerful than she appears.

Maya Banks lives in Texas with her husband, three children and assortment of pets. When she’s not writing, she can be found hunting, fishing or playing poker.

Sneak Peek! Check out this excerpt from TO WED AN HEIRESS by Karen Ranney!