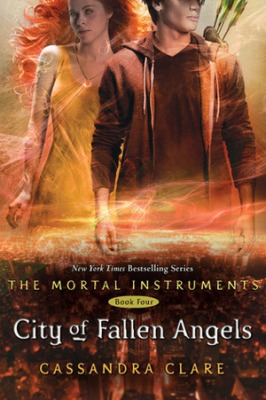 Trust is dangerous, and to love is to destroy. Plunge into the fourth installment in the internationally bestselling Mortal Instruments series and “prepare to be hooked” (Entertainment Weekly).
The Mortal War is over, and sixteen-year-old Clary Fray is back home in New York, excited about all the possibilities before her. She’s training to become a Shadowhunter and to use her unique power. Her mother is getting married to the love of her life. Downworlders and Shadowhunters are at peace at last. And—most importantly of all—she can finally call Jace her boyfriend.
But nothing comes without a price.
Someone is murdering Shadowhunters, provoking tensions between Downworlders and Shadowhunters that could lead to a second, bloody war. Clary’s best friend, Simon, can’t help her—his mother just found out that he’s a vampire, and now he’s homeless. When Jace begins to pull away from her without explaining why, Clary is forced to delve into the heart of a mystery whose solution reveals her worst nightmare: she herself has set in motion a terrible chain of events that could lead to her losing everything she loves. Even Jace.
The stakes are higher than ever in the #1 New York Times bestselling fourth installment of the Mortal Instruments series.

So, first off, not quite sure why this is considered Book 4 of The Mortal Instruments, not unless it was simply to make perfectly clear that it has the same cast of characters. The mortal instrument plot line was resolved fully in book 3. Anyhow, now that I got that off of my chest, time to write this review.
Short version is I liked it. My favorite parts were the ones that focused on Simon. He’s my new favorite character in these books. Kind of geeky, a plus. Vampire trying to be good, also good. Plus, the guy who narrated his parts for the audiobook, nice. Loved his voice and his accent. Just a real pleasure to listen to him.
The Clary and Jace relationship just can’t seem to catch a break, though. They aren’t kept apart, but suddenly Jace has to keep his distance and feels he can’t tell Clary why. After that, a lot of it reminded me of one of the earlier books. Not bad, per se, but similar. Still, I like how it all plays out in the end, quite a hook for reading the next book, too. I’m eagerly awaiting my turn to read it at the library.
As for the bad guys, there are some new ones. That’s a good thing. I also like how it isn’t quite sure who the bad guy is or their purpose until nearly the very end. Gives the story a bit of tension, something to work up to.
As for the quality of the eAudiobook, very nice. I enjoyed both of the readers, the guy especially. Their pacing was great, and I thought the voices and accents they applied to the various characters worked well with the story. However, I’m not exactly sure why two readers were necessary as the story isn’t in first person. One reader could have done it well enough. Not complaining, though. I liked it.
Overall, I really enjoyed this story, especially Simon’s parts. Fans of YA paranormal would most likely enjoy this book, though it isn’t quite as thrilling as the first three in the series. I very much look forward to reading (or listening to) book 5.

The review copy of this book was borrowed from a local library by the reviewer.

Cassandra Clare is the author of the #1 New York Times, USA TODAY, Wall Street Journal, and Publishers Weekly bestselling Mortal Instruments series and the Infernal Devices trilogy, and coauthor of the Bane Chronicles with Sarah Rees Brennan and Maureen Johnson. She also wrote The Shadowhunter’s Codex with her husband, Joshua Lewis. Her books have more than 36 million copies in print worldwide and have been translated into more than thirty-five languages. Cassandra lives in western Massachusetts. Visit her at CassandraClare.com. Learn more about the world of the Shadowhunters at Shadowhunters.com.

RELEASE DAY REVIEW by Lorna: The Girl From the Well by Rin Chupeco (@RinChupeco,@Mollykatie112)