Mattie Carver never thought she’d give up her small-town life to become one half of the best magic-smuggling duo in the business. Until recently, she didn’t even know such a business existed. But as an unusually strong reliquary—able to carry vast quantities of magic in her body, undetected—she’s been pulled into an underworld of organized crime and addictive enchantments. And although she’s determined to keep things professional, her partner, Asa Ward, is a temptation she finds increasingly hard to resist.

Even as their relationship reaches a tipping point, Mattie is wary; Asa already told her he hates cages—literal or otherwise. But when an international black-market magic exchange goes awry, Asa falls into the hands of his enemies. Now, with the man who refuses to be controlled under the command of a ruthless captor, Mattie must decide how far she’s willing to go to rescue him—assuming there’s anything left to save. 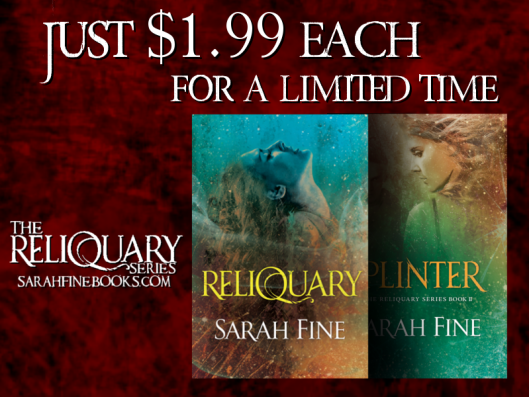 Sarah Fine was born on the West Coast, raised in the Midwest, and is now firmly entrenched on the East Coast.
When she’s not writing, she’s working as a child psychologist. No, she is not psychoanalyzing you right now.

Sneak Peek! Check out this excerpt & giveaway for SHADES OF WICKED by Jeaniene Frost!

$0.99 New Release! INSATIABLE THIRST, A Vampire Anthology in the Summer of Supernaturals Series!