Six months ago Aether Corporation sent Elena, Adam, and three other recruits on a trip to the future where they brought back secret information–but not everyone made it back to the present alive. Now Elena’s dealing with her survivor’s guilt and trying to make her relationship with Adam work. All she knows for sure is that she’s done with time travel and Aether Corporation.

But Aether’s not done with her–or Adam, or fellow survivor Chris. The travelers on Aether’s latest mission to the future have gone missing, and Elena and her friends are drafted into the rescue effort. They arrive in a future that’s amazingly advanced, thanks to Aether Corporation’s reverse-engineered technology. The mission has deadly consequences, though, and they return to the future to try to alter the course of events.

But the future is different yet again. Now every trip through time reveals new complications, and more lives lost–or never born. Elena and Adam must risk everything–including their relationship–to save their friends. 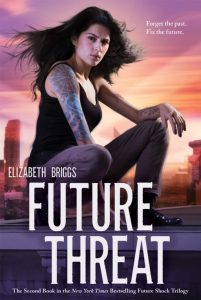 My first thought was to begin this review with the word “fascinating”, but then I thought maybe I said that in my review of the first book in this series, Future Shock. So I looked and I was right, “fascinating” all by itself was how I started that review. That word is pretty perfect to describe the series up to this point. These books are the can’t put down type that keep you turning pages and then you want more. I would classify them as older young adult science fiction/mystery. If you have any intention of reading the first book in the series, than you need to know that this review is going to feature spoilers about that book. Can’t be helped.
Six months previously, five teenagers with special talents were sent thirty years into the future in order to bring back technology by a huge corporation named, Aether. All but one of them, were foster kids, ones that have problems. They only had twenty four hours there, but, managed to find trouble on every corner. After being warned not to try and find out anything about their future selves, of course that is exactly what they do. And it’s not pretty. Now there are only three members of the original team left. And the corporation has just sent them back again-against their will. It seems that even though their foray into the future was so messed up,  the corporation has been sending another team back and forth on several occasions. Now the team is missing, so the original team is forced to go. This time they have only a few hours to find the other team. Should go smoothly, right? Wrong!
The main character is Elena. She has an eidetic memory, which means that she remembers everything. It’s also the reason she was initially chosen to go to the future. She was a foster child, jumping from one home to another. Now she’s on her own, in college, and has her own apartment-all thanks to the huge payment from Aether for her work. Also back for this installment is Adam, cute nerd extraordinaire. He was sent to the future due to his genius mind, although he was not a foster child. Elena and Adam are dating now, although Elena has no expectations that someone like Adam would ever stay around with the likes of her.The third character is tough guy, mechanically minded, Chris, who became close friends with Elena and Adam after their shared experiences. He’s married now and his wife is expecting their baby in just a few days. None of them had any intentions of ever going to the future again after what they went through the last time, but of course it happens.
So that’s all I am saying about the actually story this time. Suffice it to say that the book is a huge adventure, featuring murder and mayhem, and lots of edge of your seat moments. The question here is, will the team find the other group in time, and get everyone back to the past in one piece, or will life and death problems still plague this team, as happened previously.
The fascinating part is both the futuristic setting and the uncaring Aether corporation and all it’s evilness. There’s plenty of villains here, but there’s also a descriptive vision of the future that I am sure the author had fun imagining. I also enjoyed the romance between Elena and Adam, and rooted for Elena to get over her self esteem problems when it came to Adam-foster child with a father in prison for killing her mom and a cute nerd that will someday win the Nobel prize for his medical cures-she can’t see it.
Well written, paced, and plotted, I highly recommend this series to young adult and adult readers, ages 15 plus due to violence and language, but not sexual scenes.

Elizabeth Briggs is a full-time geek who writes books for teens and adults. She graduated from UCLA with a degree in Sociology, currently mentors teens in writing, and volunteers with a dog rescue group. She’s the author of the new adult Chasing The Dream series and the upcoming young adult novel Future Shock. Elizabeth lives in Los Angeles with her husband and a pack of fluffy dogs.