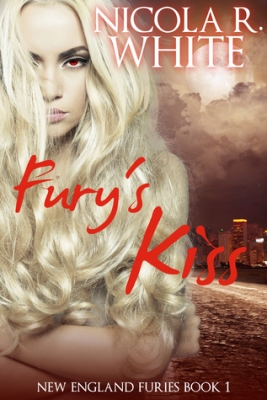 Tara Walker dreams of more excitement than slinging plates of seafood for Cape Cod tourists, but as she learns when she is attacked and forced to fight for her life, fate sometimes has a funny way of giving you exactly what you wish for. Faced with strange new powers and embroiled in a murder investigation, Tara must now race to uncover the secrets of the ancient Fury that has woken inside of her – and of the evil that stalks her.

As if Tara’s life hasn’t gotten complicated enough, she is forced to ally herself with Jackson Byrne, witness to her assault and uncle to a pint-sized oracle whose fate is intertwined with hers. Skeptical, stubborn, and oh-so-sexy, Jackson wrestles with demons of his own. He is determined to ignore the attraction rising between them even faster than the body count, but like it or not, he and Tara need each other if they are to unravel the mysteries that surround them.

Furies? I had of course heard of them-vaguely. So when I saw this on Net Galley for review, I decided to take a chance. There were minor things that bothered me here and there, but for the most part I had a good time reading this.

Tara is a waitress in a restaurant. She’s saving money to buy her own restaurant, but in the meantime, she lives with two roommates-also her two best friends. One night she goes by herself to a local bar in town that is deserted except for the bartender, Nora. This is where Jackson comes in. He’s ex-navy Seal, and in town to watch over his sister-in-law, Nora, and her little girl, Ruby. Tara takes one look at him and is in lust. Ignored by him and a little drunk, she is trying to leave when she meets a man in the parking lot. A man that won’t take no for an answer. Then Tara changes into something before the man’s eyes, and before long he is not a part of the living anymore. Appalled, Tara has no idea what’s happening to her, but she does know that no one will believe that he had attacked her, and the weird state of the body will be a complete mystery to the forensic people. So she leaves the scene. This is just the beginning of this new series by this author.

The premise of a young woman not knowing she has a fury in her head was a good one for me. Furies are part of Greek mythology and have been around for thousands of years, including the one occupying part of Tara’s mind right now. Talk about split personality. Furies live to bring vengence to the world. If a fury doesn’t kill by taking energy from a person that is guilty of truly heinous crimes, then she starts to lose her own energy. So it’s a must. Needless to say, killing people, guilty or not, isn’t something that Tara had ever done before.

I completely enjoyed all the good characters in this read. Tara is feisty as they come, beautiful, and completely flumoxed by the turn her life has taken. But she rises to the occasion beautifully. Her roommates were also very well drawn by the author. Alex is an exotic dancer, one that had a horrible childhood. The only love of her life is dance, but with no money to further her study, she takes what work she can get. Rachel is the quiet, smart, libraian type. When they find out what going on with Tara, they jump in to help her. Nora, the bartended also gets involved. She knows what Tara is, because she has her own story of the paranormal type that I won’t go into here. And then there is Jackson. Jackson spends his time trying to fight the lust he also feels for Tara. He sees her as an enemy-someone that will hurt his family. Throw in an FBI agent, a serial killer, and a few other unsavory types, and this book gets even better. Oh, and the witch that lives next door was quite the character!

I alluded to a few things that bothered me earlier. They were tiny plot holes that when you take the book as a whole, didn’t bother me. I literally decided that they didn’t matter, and that’s because this book is such a fun read. Yes, there’s danger and death, snipers and killers, etc., but it just was a read that didn’t take itself that seriously. And no, it wasn’t a comedy either. Dramedy maybe? It’s a romance, but it’s also about the family that Tara has made with her best friends. The banter between the three was hilarous at times. And I can’t forget to mention Alecto-Tara’s new resident in her head. She was the reason for some laughter several times, as well.

I would highly recommend this as a good read for paranormal romance readers, and even UF fans that don’t mind a romance, as well. It’s a series, so I expect to see the roommates involved in all kinds of havoc before it’s all said and done. Good read!

Nicola R. White is no stranger to the fantastic. Although there are no Furies in her family tree (that she knows of), she comes from a small city on the east coast of Canada where ghost stories and superstitions abound. She has worked on movie sets, as a bartender, in a lighthouse, and as a lawyer, and though she’s never been an exotic dancer like her character, Alex Hughes, she does know how to pole dance.

She has always been fascinated by the strange and morbid, and often stays up too late reading books that give her nightmares. She believes truth is stranger than fiction, and just a few of her heroes are Buffy, Dana Scully, and Xena.

New Release! Check out this giveaway and excerpt from WICKED CHALLENGE by Marty Mayberry!