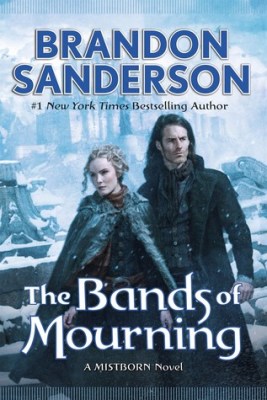 The #1 New York Times bestselling author returns to the world of Mistborn with the follow-up to Shadows of Self.
With The Alloy of Law and Shadows of Self, Brandon Sanderson surprised readers with a New York Times bestselling spinoff of his Mistborn books, set after the action of the trilogy, in a period corresponding to late 19th-century America.
Now, with The Bands of Mourning, Sanderson continues the story. The Bands of Mourning are the mythical metalminds owned by the Lord Ruler, said to grant anyone who wears them the powers that the Lord Ruler had at his command. Hardly anyone thinks they really exist. A kandra researcher has returned to Elendel with images that seem to depict the Bands, as well as writings in a language that no one can read. Waxillium Ladrian is recruited to travel south to the city of New Seran to investigate. Along the way he discovers hints that point to the true goals of his uncle Edwarn and the shadowy organization known as The Set.

KEEP READING TO LEARN MORE ABOUT THE BOOK
AND READ TRISH’S REVIEW!

Let me start by saying I missed reading book 5 (heck, I hardly realized book 5 was out before book 6 popped up), so I have only a vague idea of what happened and a not-so-vague idea that I should definitely read that one, and soon.
Anyhow, book 6 features the chaotic sleuthing of Waxillium Ladrian and his irreverent sidekick, Wayne, joined by Steris, Marasi, and MeLaan, all while a thickening plot by Wax’s nefarious uncle and a mysterious organization called The Set threaten the tenuous peace of the settled lands around Elendel.
There are so many things I love about this book. First of these, though, are the jovial humor and intrinsic likeability of the characters (at least of the good guys). Wayne’s very much my favorite character, though I had trouble remembering who he was at first (it’s been awhile since I’ve read The Alloy of Law). He’s the ultimate chaotic-good character: the rogue, the thief, but loyal and with an odd sense of right vs. wrong, also delightfully unpredictable. And of course, Wax. He’s really the star of the whole thing: the hero, fighting against all odds, figuring things out, sometimes too late to do anything about them, but always ready to act.
Then again, Marasi, Steris, and MeLaan definitely hold their own. Merasi’s much stronger and confident than I remember her being in The Allow of Law, and Steris is much more complex and interesting than she seems at first glance. Then there’s MeLaan, fascinating. These three, though not necessarily the focus of the book, are vital to it, and each display an admirable strength of character and will. So, yeah, the characters really bring this story to life, just as in all the previous books in this series.
And the action. Wow. The action draws the story along, promising one outcome, but often delivering another. I really had trouble putting this down. Each chapter melds into the next in a satisfying and infuriating way that kept me up way too late for several nights in a row. Totally worth it, though. Totally.
So, overall, I loved this story and would strongly recommend it to those who love action-packed adventure, fascinating and structured magic, and plenty of wit and humor. If you haven’t already read the other books in the series, I’d recommend picking up all six and reading them in order.
My homework is to go forth and read book 5. I would have done so first had I not had a review deadline that coincided with the release of book 6. Anyway, no regrets. None. One thing I love about Sanderson’s books is that they’re all immensely re-readable.

The review copy of this book was supplied by the publisher in exchange for a fair and honest review. 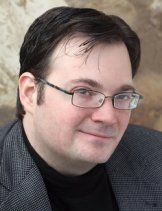 I’m Brandon Sanderson, and I write stories of the fantastic: fantasy, science fiction, and thrillers.
January 2015 marks the release of Firefight, the sequel to Steelheart. When only evil people gain super powers and become tyrants, it’s up to normal people to hunt them down. There is a free 5-chapter preview ebook of Steelheart here on Amazon that you should check out, with a corresponding sampler audiobook on Audible. My Firefight book tour in the US lasts throughout January.
Recent short releases are Legion: Skin Deep (sequel to Legion), the further investigations of an average man whose many hallucinations are all experts in their own fields, and also my novella Sixth of the Dusk, set in the same universe as Mistborn and Stormlight, revolving around an attack on an island trapper’s way of life.
My biggest recent epic fantasy is Words of Radiance, written as a love letter of sorts to the epic fantasy genre. It continues the story of the Stormlight Archive that began in The Way of Kings, and it’s the type of book I always dreamed epic fantasy could be. October 2015 and January 2016 will also see the release of two new Mistborn books, Shadows of Self and Bands of Mourning.
Mistborn and the Stormlight Archive are among my most popular works, as are my concluding volumes to Robert Jordan’s epic series The Wheel of Time. My novella The Emperor’s Soul won a Hugo Award in 2013. That year also marked the release of my first young adult fantasy, The Rithmatist.
Sample chapters from all of my books are available at brandonsanderson.com/library — and check out the rest of my site for chapter-by-chapter annotations, deleted scenes, and more.

REVIEW by EN Blake: Hotline to Hell by Emily Cyr – Includes an Excerpt!

REVIEW by Kayla: The Simple Life by Tara Sivec – Includes an Excerpt!

REVIEW by Catina: Her Betrothal by Alice Wilde – Includes an Excerpt!