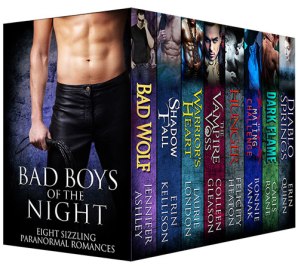 KEEP READING TO LEARN MORE ABOUT THE BOOK
AND ENTER THE GIVEAWAY!

Bad Wolf (Shifters Unbound) by Jennifer Ashley
Wolf Shifter Broderick is stuck looking after his three younger brothers and a Collar-less Shifter who is driving him crazy, but he’s putting up with them for Joanne, the human woman he wants to take as mate. When Broderick is captured, mistaken for a Guardian, it’s Joanne who figures out that hackers are after the Guardian Network, the database that holds the deep secrets of Shifters past and present.
Shadow Fall (Shadow series) by Erin Kellison
A man with all Custo’s sins isn’t cut out to be an angel. One moment he’s fleeing Heaven; the next, he’s waking up stark naked, called by a woman who’s afraid of the dark. Shadow gathers around Annabella as she performs, a magic that allows her to move between worlds. Her abilities attract a primeval wolf, and it stalks her relentlessly. Custo stops at nothing to keep her safe, and though danger proves seductive, they fight for redemption and love.
Warrior’s Heart (Iron Portal) by Laurie London
Librarian by day, Zara Kane is a thief by night, stealing artifacts that belong to her homeland. When she learns a man she once loved has been wrongly imprisoned, she uses her para-abilities to orchestrate a daring escape.
Vince Crawford isn’t afraid of anything, but when the woman he’s never stopped loving and the son he never knew he had are threatened by a ruthless enemy, he will stop at nothing to keep them safe…even if it costs him his life.
The Vampire Voss by Colleen Gleason
In 19th Century London, vampires live alongside the uppercrust members of Society…
Even after centuries of lust, hedonism, and women, Voss, rarely finds himself bored. He is a rogue of the first order who loves nothing more than a warm woman, excellent vintage, and even a puzzling challenge to keep his mind active. But when one of his seemingly harmless manipulations sets him on the path to seduce the beautiful Miss Angelica Woodmore, things become a little less simple…a lot more passionate…and definitely more complicated.
Hunger (Vampires Realm Series) by Felicity Heaton
A vampire assassin hardened by centuries of service, Tor is a man of discipline and loyalty, never straying from his mission, and has purged all his weaknesses, including his emotions. But the moment he meets the broken, fiery female he is to escort to Oslo, something dangerous awakens in him, something possessive and powerful, and when he is pulled into a deadly game of cat and mouse with the man who betrayed her, Tor discovers he will do anything to protect the woman slowly claiming his heart and give her the vengeance she desires–even break all the rules.
The Mating Challenge (Werewolves of Montana) by Bonnie Vanak
Alpha werewolf and ranch owner Aiden Mitchell desires the curvy, vivacious Nikita Blakemore, alpha female of the Blakemore pack. He will have her as his mate and no other. To force her hand, Aiden maneuvers her into hosting a Mating Challenge, the ultimate warrior competition for werewolves, where males fight for the right to mate and breed with a female alpha. Fiercely protective of his future mate, Aiden will do anything to make her his own, even fight to the death…
Dark Flame (Flame Series) by Caris Roane
Committed to the rule of law, vampire Border Patrol Officer Robert Brannick falls hard for a beautiful fae woman who illegally seduces him in his dreams…
Diablo Springs by Erin Quinn
When she escaped Diablo Springs years ago, Gracie Beck swore she’d never return. But all that changes on the night of her grandmother’s death when Diablo Springs lures Gracie’s teenage daughter to its treacherous border. Gracie races to the rescue–only to find herself trapped in the undercurrent of a hundred year old curse and the menacing spirits that still terrorize the town. She isn’t prepared to deal with Reilly Alexander–a man from her past who she’s never forgotten–at the same time. Reilly is determined to help Gracie and prove his to love to her, but they’ve come to a dangerous place where every lurking shadow should be feared….

To celebrate the release of the Bad Boys of the Night boxed set, Pure Textuality is hosting a giveaway of an ebook copy of Dark And Damaged:  Eight Heroes of Paranormal Romance.  To enter, just leave a comment on this post!  Open internationally.  Winner will be chosen Friday February 26th @ 12:00pm EST.
About Dark And Damaged

ROBERT BRANNICK STARED at Juliet, every suspicion lit on fire. She’d been the star of a recent dream and the hot-as-hell images kept streaming through his head like a porn movie he couldn’t shut off.
Yet something about the dream wasn’t right.
He just didn’t know why.
He was in the garage of a private homeowner, moving boxes away from a secret tunnel entrance he’d built to smuggle abused human females out of Five Bridges. Tonight, Juliet had driven the van containing four of them, each rescued from Revel Territory sex clubs. With the vehicle in the garage and the door shut, the neighbors wouldn’t be able to see what they were up to.
He steadily shifted boxes and plastic tubs out of the way.
Another image flashed.
Juliet’s long curly hair splayed out on his red sheets.
Lips parted.
His body moving over hers, connected.
Her cries filled his bedroom.
He could see each freckle on her creamy skin and her hair smelled like strawberries.
So real, like more than a dream.
Doubt nagged at him about what had actually happened between them, as in something very fae and highly illegal.
He glanced at Juliet again, the star of his cockfest and a beautiful alter fae woman. He couldn’t seem to move as he watched her.
She stood next to the van and wore a loose, light green dress, a gauzy thing that draped her curves. He’d seen those curves in his dream, beautiful, lush, full. His hands and mouth had been all over her. Would she look the same as what he’d pictured beneath the dress?
She glanced at him and turned her hand in question, probably because he was staring at her. She had large, dark blue eyes, even delicate features and all those faint freckles that in the dream he’d kissed over and over.
She was about to open the door, but when he remained silent and staring, she let go of the latch and turned in his direction.
“Everything okay?” Her voice had a soft, melodious sound. She was a feminine kind of woman, not like the vampire females he banged noisily in Crescent Territory. But then Juliet was an alter fae who lived in Revel, not vampire at all. In many ways, she was his opposite.
He tore his gaze away from her, resisting the urge to clear his throat, then put his feet in motion. He called out, “Everything’s fine.”
But he knew in his gut it wasn’t. As soon as they got the women to safety, he’d have to confront her about what he suspected was going on…
Grab the boxed set for just $0.99 to read this story and seven others…
Bad Boys of the Night: Eight Sizzling Paranormal Romances is available from Amazon Kindle, Kobo Books, Barnes and Noble Nook, Apple iBooks stores and other retailers. Find the links to your preferred retailer at: http://www.felicityheaton.co.uk/bad-boys-of-the-night/

QUICKE REVIEW by AmyS: Hotline to Hell by Emily Cyr – Includes an Excerpt!