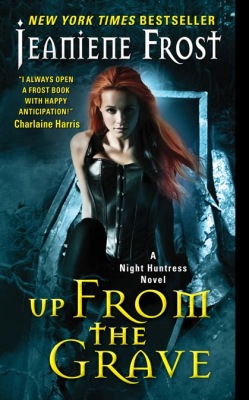 Lately, life has been unnaturally calm for vampires Cat Crawfield and her husband Bones.  They should have known better than to relax their guard, because a shocking revelation sends them back into action to stop an all-out war…
A rogue CIA agent is involved in horrifying secret activities that threaten to raise tensions between humans and the undead to dangerous heights.  Now Cat and Bones are in a race against time to save their friends from a fate worse than death…because the more secrets they unravel, the deadlier the consequences.  And if they fail, their lives–and those of everyone they hold dear– will be hovering on the edge of the grave.
Final novel in the Night Huntress series.

This book is part of a series which has a couple accompanying spin-off series.  We’re going to include them all here in cross-series reading order.  Click the cover for the book’s Kindle listing on Amazon.com.  – Jena, Pure Textuality Owner

Lorna’s Review of Up From the Grave

The gangs all here. I am so late reading this last in the series, but I am happy to report that Ms. Frost surpassed all my expectations. She managed to bring back most of the characters from the previous books, and I loved every minute of it.
The crux of all of these books is of course, the relationship of Bones, and his wife Cat. Look on any list of favorite male characters from a paranormal series and you will find Bones-usually in the top five. I know he makes my top five! Bones is probably a couple of centuries old and is a master vampire. Cat was born a human/vampire hybrid and began killing vampires in her teens, due to the urging of her mother that understandably hates vampires. She meets Bones and for the first time is unable to get the best of a vampire, you know because of how powerful he is and all. And so began their romance. And it was always(with the exception of a 5 year hiatus) a great romance, even after Cat becomes a full vampire.
The story has been building up to this point for at least a couple of books now. The secret government agency that the pair worked for at one point has now been taken over by Madigan. Madigan is not a nice man, and that is a major understatement. Cat’s Uncle Don, formerly the head of the agency, is now a ghost. He’s worried about what’s going on at the agency and fears for all the men that worked under him. Men that are friends of Cat and Bones. They are missing and the duo take it upon themselves to finally solve the mystery of what’s actually happening at the agency and the whereabouts of their friends.
This one takes place in different places within the U.S., with a side trip to Romania to attend Vlad’s nuptials. Vlad is the original Dracula and has his own series, Night Prince-one that I love as well. There’s also a trip to New Orleans where Marie Laveau(once the queen of voodoo) is now the queen of the ghouls. She’s showed up in several of the books now and there’s never a dull moment when she’s around. All of Bones master vampire friends come to help and Denise, Cat’s best friend is instrumental in aiding the couple. As I said, the gang IS all here.
In the end, Don did know a lot more than he was letting on. And none of it is good! I won’t go into specifics, but wow..just wow! And wrapping the story up also included a major surprise for this couple, one that will knock the readers socks off! It knocked Bones and Cat for a loop as well, but also contributed to a wonderful storyline for the couple, one that gives them their ultimate immortal happily ever after.
I highly recommend this and the entire series-which should be read in order due to the ongoing storyline-to adult paranormal romance readers.

The review copy of this book was purchased by reviewer.

Click the banner to read Jena’s interview with Jeaniene from November 2012.

Jeaniene Frost is the New York Times, USA Today, and international bestselling author of the Night Huntress series, the Night Prince series and the new Broken Destiny series. To date, foreign rights for her novels have sold to twenty different countries. Jeaniene lives in North Carolina with her husband Matthew, who long ago accepted that she rarely cooks and always sleeps in on the weekends. Aside from writing, Jeaniene enjoys reading, poetry, watching movies with her husband, exploring old cemeteries, spelunking and traveling – by car. Airplanes, children, and cook books frighten her.