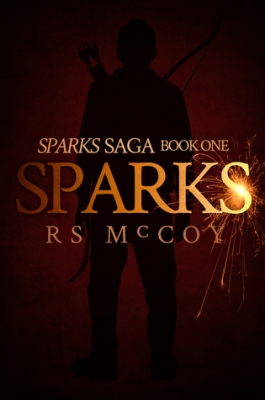 “Everyone in the world has a Spark, a light inside that guides them, keeps them alive.”

Starting school is supposed to be a fun and exciting time for any new student. But for Lark, a skilled archer and fledgling mind-reader, it’s a creative form of torture. Locked in rooms and hallways with both friends and enemies, bombarded by the thoughts and feelings of his peers, Lark is a prisoner.

On a quest to master his Spark, Lark’s mentor–his one ally–is anything but helpful. What Lark fails to realize is the value of his rare ability, and just how far some are willing to go to have control of him.

This book has all the expected elements of a great fantasy book. It’s not muddied up with highschool drama or shifter-wolf lovers. There are no vampires or ghosts. There’s no detailed intimacy. Nope, this is simply a great, well-planned, and satisfyingly executed fantasy novel, the first of a now complete trilogy.

Unlike some fantasies, though, the story is told from Lark’s perspective (limited 3rd person) the entire time. I found this somewhat refreshing. It’s not that I don’t enjoy a little perspective hopping, but I think the choice to keep it to Lark was a good one. Plus, it was well done and likely kept the story from getting too longwinded. Though we don’t get in the heads of the other characters, Lark is observant enough and aware enough to pick up on the other character’s emotions and motivations, plus, his spark allows him to read their thoughts, so there’s that.

Finally, I enjoyed the magic system, the sparks. They encompass a range of abilities all the way from druidic (as in communing with animals) to physical (the obligatory control over the elements) to mental (like Lark’s mind reading). The Myxini school, which Lark and his friends attend, teaches its gifted students how to master their sparks, among other things. While students are separated according to type of spark, there are rumors that at times an incredibly gifted student is blessed with more than one. That in itself piqued my interest. I love stories where it seems someone in the main character’s inner circle is super gifted. And this one did it in a way that it didn’t turn anyone into a superman figure, too perfect to believe, and neither did it make it obvious, which kept me guessing.

I guess if I had to pin down anything I didn’t like it would have to be the time jumps in the middle and also the ease with which the characters accepted their lot in the end. As for the time jumps, they were probably needed to keep the story from being bogged down in tedium, but some were rather sudden, a whole year gone by with a quick recap of the highlights, or a choppy shift between fast forward and real time in others. As for the end, well, I don’t want to spoil it. Let’s just say it left me confused, just a bit, about why the characters would make the choices they did under those circumstances, although the outcome was in tune with my expectations for a book in the fantasy genre.

Overall, I really liked this book. It had a great balance between fantasy elements, politics, and plotting. It’s not too complex or long, but it is meaty enough and long enough to keep the reader engaged. I found the characters and the world well-developed without being bogged down in description. As for those few things I didn’t like, they weren’t enough to take away from my enjoyment of this book. I would recommend this story to folks who enjoy fantasy, magic, and coming of age books.

The review copy of this book was supplied by the author in exchange for  fair and honest review.

RS McCoy didn’t ever plan on being a writer. With a career teaching high school science, writing is the last thing she expected. But life never goes the way you think it will. While battling cancer, she picked up her laptop and let the words flow out. One year later, her first published fantasy novel will be released on Amazon soon and her second novel is in the works. She is a wife, mother of one with another on the way, a scientist, baker, gardener, and life-long science fiction and fantasy addict.

REVIEW by Jena: Close to the Bone by Kendra Elliot