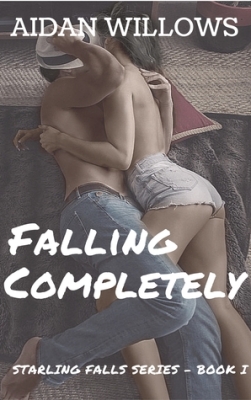 MALIYA
Falling in love is not for me. I don’t do relationships, they never end well.
I don’t believe in fate, soul mates or happy, fairy tale endings. I’m definitely not a sweet little princess in search of her prince.
I have a plan to follow and falling in love is not part of that plan.
Nothing is going to change my mind.
Not even a domineering, gorgeous, blue-eyed firefighter who seems to be everywhere I go.
CALEB
The moment I saw her, I knew.
I knew the funny, curvy, raven haired beauty was supposed to be mine.
She may not agree with me at the moment, but I’m a patient man.
I’m not afraid to play dirty to get what I want.
And I want Maliya Abbott.
When her sister decides to move from London, across the Atlantic Ocean to Starling Falls to run an estranged relative’s bakery, Maliya Abbott is pretty sure her sister has lost her ever-loving mind.
Not wanting to be separated from the only family she has left, Maliya goes with her, a move that was only supposed to last a year. After all, training to be a doctor at the same University her parents did had always been her goal.
What she hadn’t planned on, was meeting Caleb Jameson. A man who is adamant they are destined to be together. That would be great, if she actually believed in any of that crap.
She also hadn’t planned on his insane, lovable, meddling family trying to derail her plans.
Maliya is a smart girl. She knows what she wants and what she doesn’t want. She definitely wants to go to Oxford University and train to become a doctor. She definitely does NOT want anything to do with Caleb Jameson.
Now, if only she could get her stupid heart to listen to her head.
Authors Note: 18+ For mature readers only. Book contains graphic language, scenes of a very sexual nature, a dirty-talking and determined alpha male, a sassy and food obsessed heroine who talks to herself far too much, a cynical and suspicious geriatric aunt, a meddlesome family, some very unhelpful friends, a mind controlling goldfish and a possibly cannibalistic cat…

Falling Completely (Starling Falls #1) is your average novel about boy meets girl and falls in love. In this book two sisters move from London and into their aunt’s house to help her run her bakery business. Caleb is the man who falls for one of those sisters and, for baggage, he has a vast family.
I think Caleb is far too stereotypical of what we have come to expect a man to be in an erotic novel and it would have been nice to read about somebody who isn’t so persistent, it was off putting for me that he wouldn’t take no for an answer and he came across as arrogant. The pet name of angel made me roll my eyes, as that isn’t terribly original either.
This feels like it could be a YA novel, which is confusing because there are erotic parts in this and the characters are all in their twenties and not in their teens.
This is exuberant, which again makes me think of this as a YA novel. It does seem to be the work of an amateur, as it has an overflow of ideas and copious dialogue. Despite that Falling Completely is a page turner and a likeable family drama, with comedic parts that I enjoyed.
A great read for those that like a sizzling romance, which doesn’t take itself too seriously.

Aidan Willows lives in London, England. She graduated from the University of London with a degree in Psychology.
After spending an absurd amount of time in the company of her e-reader, she finally decided to put pen to paper (or fingers to keyboard) and finally let loose all those imaginary friends she has floating around in her head.
She is an avid reader, daydreamer, tea fanatic, amateur baker (though her and bread have a tempestuous relationship), appreciator of all things whiskey related and she generally watches far too much television.

REVIEW by Trish: You Suck: A Love Story by Christopher Moore

Looking for a new audiobook read? Check out The Sound of Stories audiobook event!