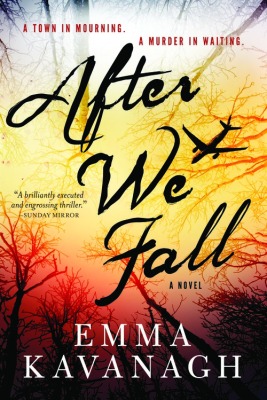 Blood stains the carpet of an empty house. A front door slams behind a mother with a suitcase full of secrets. Someone screams. A plane falls out of the sky.

Cecilia made the hardest decision of her life moments before she stepped onto the plane that would bring her world crashing down. Her marriage was failing before even getting off the ground, and her desperate need to start over has driven her to abandon her family. Now, as her plane plummets toward the ground, she wishes she had given her son one last kiss good-bye. As tragedy meets mystery, Cecilia and three others, each struggling with their own secrets, become connected on one fateful night when lives are lost in the sky and on the ground.

KEEP READING FOR LORNA’S REVIEW AND
AN EXCERPT SNEAK PEEK!

After We Fall
by Emma Kavanagh

I started this book, read the first chapter, and just put it down for a couple of weeks. I just wasn’t sure I was going to enjoy the read. However, I picked it back up and once I got into the book, I pretty much didn’t put it down. I received a copy of the book from the publisher, by way of Net Galley in exchange for a fair and honest review.

A central event like a plane crash has definitely been done before. But not for one minute did I get a deja vu moment while reading this book. It’s pretty much an ensemble piece, rather than just a couple of main characters, although if I had to pick one it would be Cecilia, the flight attendent who is one of only thirteen passengers that survive the crash. She’s one of the most complex characters that I have read in a very long time. She was in the midst of leaving her husband and toddler son, with the intention of never coming back. She was on her last flight, and is almost as broken inside herself, as the people that died on the flight were broken. Her husband is Tom, a homicide detective and primary parent to Ben, the couple’s child. There is no love in this marriage and really there never was. He is working on a young woman’s murder case, and this secondary story is really as major a story line as the plane crash is in this read.

So what started out with a plane crash, evolves into a full on murder investigation, making this a mystery on two levels, why did the plane crash? and who killed the woman and why? Lots of other characters are involved, the most major ones being the pilot’s daughter and son, Freya and Richard-and their mother. The father of the dead young woman, Jim, is a retired police detective, and just makes Tom even more determined to find the murderer.

This was one of those books that although starts out with a plane crash, steadily moves forward to a much bigger conclusion-the kind that makes the reader move through the book just knowing there is so much more to the story than what you originally think. It has twists and turns, and quite frankly it did surprise me-I went back and forth about the who done it part many times. It’s always a good mystery for me when I can’t figure the end out easily.

I found the book to be extremely well written, pulling together a story that linked all the parts and characters together amazingly. At the time this was first released under the name Falling, it was the debut for this author-who I think has at least one other book out now as well. That the author’s debut book is this well thought out and plotted is just outstanding. I highly recommend this book to mystery fans, and anyone that just enjoys a good story. It’s not necessarily an adult read, but due to a violent death(plus the plane crash deaths) and some mentions of sexual situations-although not shown, I would still suggest it for ages 15+.

ABOUT EMMA KAVANAGH
Emma Kavanagh was born and raised in South Wales. After graduating with a PhD in Psychology from Cardiff University, she spent many years working as a police and military psychologist, training firearms officers, command staff and military personnel throughout the UK and Europe. Now she is lucky enough to be able to write for a living. She lives in South Wales with her husband and young son.